Commerce content is independent of Editorial. All net proceeds from this site go to benefit those affected by COVID-19.

New York Gov. Andrew Cuomo (D) on Tuesday threatened to sue Donald Trump if the president orders states to lift their stay-at-home orders too early and rushes to reopen the economy before the COVID-19 pandemic safely subsides.

The warning escalated the back-and-forth between state governors and Trump, who falsely declared his “authority is total” in a propagandistic press briefing Monday.

“If he ordered me to reopen in a way that would endanger the public health of the people of my state, I wouldn’t do it,” Cuomo said on CNN. “And we would have a constitutional challenge between the state and the federal government, and that would go into the courts. And that would be the worst possible thing he could do at this moment, would be to act dictatorial and to act in a partisan, divisive way.”

.@NYGovCuomo: “If [Trump] ordered me to reopen in a way that would endanger the public health of the people of my state, I wouldn’t do it.” 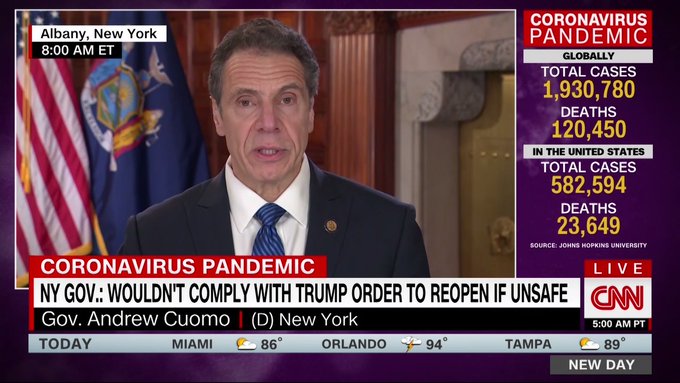 At his daily press briefing Monday, Cuomo — who leads the state that has long been the epicenter of the coronavirus pandemic in the U.S. — said he was cautiously optimistic “the worst is over,” but warned that lifting restrictions too early could set back any progress already made. While most indicators show a possible flattening of the curve of COVID-19 infections, hospitalizations are still at about 2,000 per day. And on Monday, the state officially crossed 10,000 deaths — not including many deaths that have gone uncounted.

“I have 10,000 deaths in my state,” Cuomo said Tuesday. “This virus didn’t kill Democrats or Republicans — it killed Americans, and it killed New Yorkers, and I’m not going to go down a political road.”

Trump responded in a tweet Tuesday, accusing Cuomo of “begging for everything,” and falsely claiming “I got it all done for him, and everyone else.”

Stock up on nutritious foods so you’re prepared at home. Nutritious, delicious and ready to eat in seconds.

Only made with natural and whole food ingredients

Use Code FOODKIT15 At Checkout For 15% Off

In fact, Trump’s administration has consistently failed to send states their full requests for ventilators and other medical supplies, even sometimes interfering with their own purchasing. But it has sent the full request to Florida, a state led by Trump ally Gov. Ron DeSantis (R).

After widespread evidence Trump and the federal government botched the U.S. response to the pandemic, governors have largely led the response, often in a collaborative way. That became more formalized Monday, when two groups of governors, in the Northeast and on the West Coast, announced joint task forces to develop a plan to reopen their states together.

Joining forces with the governors of Connecticut, New Jersey, Pennsylvania, Delaware, Rhode Island and Massachusetts, Cuomo has frequently argued that their economies and travel are intertwined, as many people live and work among the neighboring states.

Later Monday, Trump falsely declared his “total” authority and lashed out when reporters pointed out that was not the case. When asked if he had asked the governors if they agreed he had the authority to order them to reopen their states, he said, “I haven’t asked anybody, because I don’t have to,” before refusing to answer any more questions about the issue.